12 Artworks Where People Turn Into Trees & Trees Turn Into People

In Greek and Roman mythology, Daphne was a nymph whose beauty attracted the attention of the god of music, poetry and a bunch of other things: Apollo. In Ovid’s Metamorphoses, Apollo falls in love with her because the god of love, Eros, wants to get back at him for making fun of his archery skills (a little much right?). He shoots Apollo in the heart with an arrow made of gold to make him fall in love, and he shoots Daphne with a lead arrow to incite hate, pitting the two against each other and driving Apollo crazy. Eventually Apollo is chasing Daphne so she calls out to her mother Gai who rescues her by transforming her into a laurel tree.

But that’s not the only ancient tale about people turning into trees. Ovid tells another story in Metamorphoses VIII about an old couple, Baucis and Philemon, who were the only ones in the town to invite the disguised gods, Zeus (Greek)/Jupiter (Roman) and Hermes/Mercury, into their home even though they were much poorer than their neighbors. They were taken up to a mountain by the gods, who flooded the town once they were safe, and their house was transformed into a temple. They were made the guardians of the temple, and were also granted their request to die at the same time as the other. When they did die, they was transformed into a pair of intertwining trees, one oak and one linden.

But from the looks of it, there are probably a lot more reasons why people turn into trees. Maybe trees can even turn into people, Pocahontas-style. 3. “Apollo and Daphne” by cgaddict 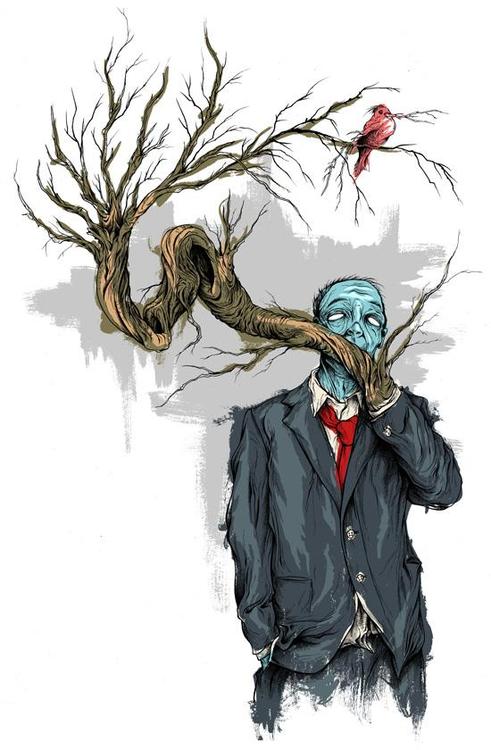 Know any of the artists featured above? Is your work up there? Email me and let me know!

And if you have your own transforming tree art to add, please comment!