Water lilies, water lilies, water lilies. One of the most renowned and beautiful pieces of art sits before me right now. I mean, I couldn’t not write about it. Or at least try. I don’t know when these paintings arrived at the MoMA, but I’m so glad they’re here. The different layers of water, white, and lillies gives the whole scene so much depth. The rich, whitest pink that reflects the clouds above, along with the dark deep shadows on the right, lets me imagine the world outside this piece, and imagine myself in it. Another layer of depth comes from the varying shades of blue, indicating which spots of the lake are the deepest within the water. The green lillies are surrounded by a light hue of purple in some places, setting them apart while blending them into the blue water beneath at the same time. So so beautiful. Everyone come see it in person. Right this second.

His body is shown contorted, comprised of rounded shapes derived from the natural world. Reality is not a concern in this place, a semi-composite view is even used to reveal a second butt cheek and a line of back muscle that would have remained hidden otherwise. His face is grayed and abstracted in the same fashion. His joints consist of more rounded pieces than the rest of him; each piece of his shoulder fits into the next the same way our shoulders give us the same ability. But second to his abstracted use of composite parts, comes his use of color, with dark to light gradients revealing shadows on his back and a point of light lying behind the viewer. And the abstract use of stark white on his behind and dull gray on his face complements the rest of the portraits abstract nature. He’s holding his towel that still partly lingers on the ground while wiping his brow with his other hand. His unnatural pose and abstract representation leave us with no indication as to whether he’s just had a bath or is about to. He could be really dirty or really clean, although it hardly seems to matter. Only in that it gives him a reason to be nude and on the beach.

(I saw the de Kooning: A Retrospective exhibit at the MoMA this weekend:)

Because of its strategic placement within the exhibit, you know it’s a big deal. It’s at the dead center in the very back, as a way of suggesting that this is what the rest of the exhibit is leading up to. And it’s understandable why it’s such a big deal. I’ve never seen anything like it. It was completed in the same harsh, hurried style that de Kooning seems fond of, but the slashes and spots of color seem more like the result of a more methodical process. The yellows, dark pinks, turquoises, and deep reds break through the overwhelming creme/beige color in ways that both complement the colors themselves, as well as their placements on the canvas. The sometimes-dripping, sometimes-smudged, black lines that surround and seem to almost reveal these colors really does make the piece a kind of excavation. A search for color and brightness that takes a lot of harsh black and ugly beige to find. It makes me pretty proud to be wearing bright red pants as I stand here staring at it. 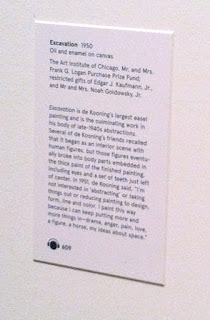 At first glance she’s almost frightening. The harsh, dripping nature of the ink outline of her dress gives the whole piece a rather crude, unfinished look. But it’s obvious by the content of the painting that it actually is finished.
The woman’s left eye is wide and cartoon-like, while her right is blurred and blinded by a huge star above her, morphing the entire space where her eye would be into a deliberate reflection of the star’s dark light. The other elements of her face are scratched out in a similarly eerie fashion, with her nose mostly nostril and her mouth mostly teeth. The empty, colorless outline of a house behind her is only background, the past, forgotten. Especially when confronted with her rounded irregular breasts magnified by their foreground presence, and bright off-putting hues of purple, pink, turquoise, and orange. The pale, sick yellow of her willowy hair mirrors the yellow of the star that she seems to be so enthralled with.