Birds and Trees on Russia’s Streets

Three of the Angry Birds sit on a wire. They look just as unhappy as they do on your iPhone, except we’re not the ones controlling them and they don’t seem to have much of a purpose with no blocks or green elephants to knock down. Here they’re perched on the edge of an actual wire fixed to the outside of this building – gray followed by red followed by yellow – three little puffs of color with makeshift tails and upset eyes. There’s no reason for them to be angry on this wall but otherwise we might not recognize them. Alexey Menschikov is a Russian artist peppering the streets with his brightly-colored art while pursuing photography in black-and-white. He turns something physical about a fence or a wall into the starting point for each drawing, combining something that’s actually there with something two-dimensional, merging his imagination with reality in a public place. Often these physical lines start out as cracks or wires, but Menschikov turns them into ground lines and tree branches and perches birds or shapes or shadows on top. The saxophone is the subtlest of them all, each of the three brackets that hold the pipe to the wall stretch out to hold up the painted shadow of a make believe musical instrument – turning something ugly and functional into the idea and shape of something beautiful. The saxophone’s slender neck slips down to ground-level and loops up.

The little yellow bird that sits on cracked red pavement has his eyes closed. The tree branch he struts across has only become more than a crack in the ground because of one little painted bird.

Alexey’s second pavement crack turned tree branch happens on gray ground – the little tree reaches up from the manhole cover that caused the crack, and it’s painted with pale green leaves. On the right branch sits two little owls, one mommy and one baby, both with eyes wide open and green-yellow bodies simply decorated. All images from the artist’s Live Journal.

See Alexey’s Facebook page for more of his work.

The best street art in France 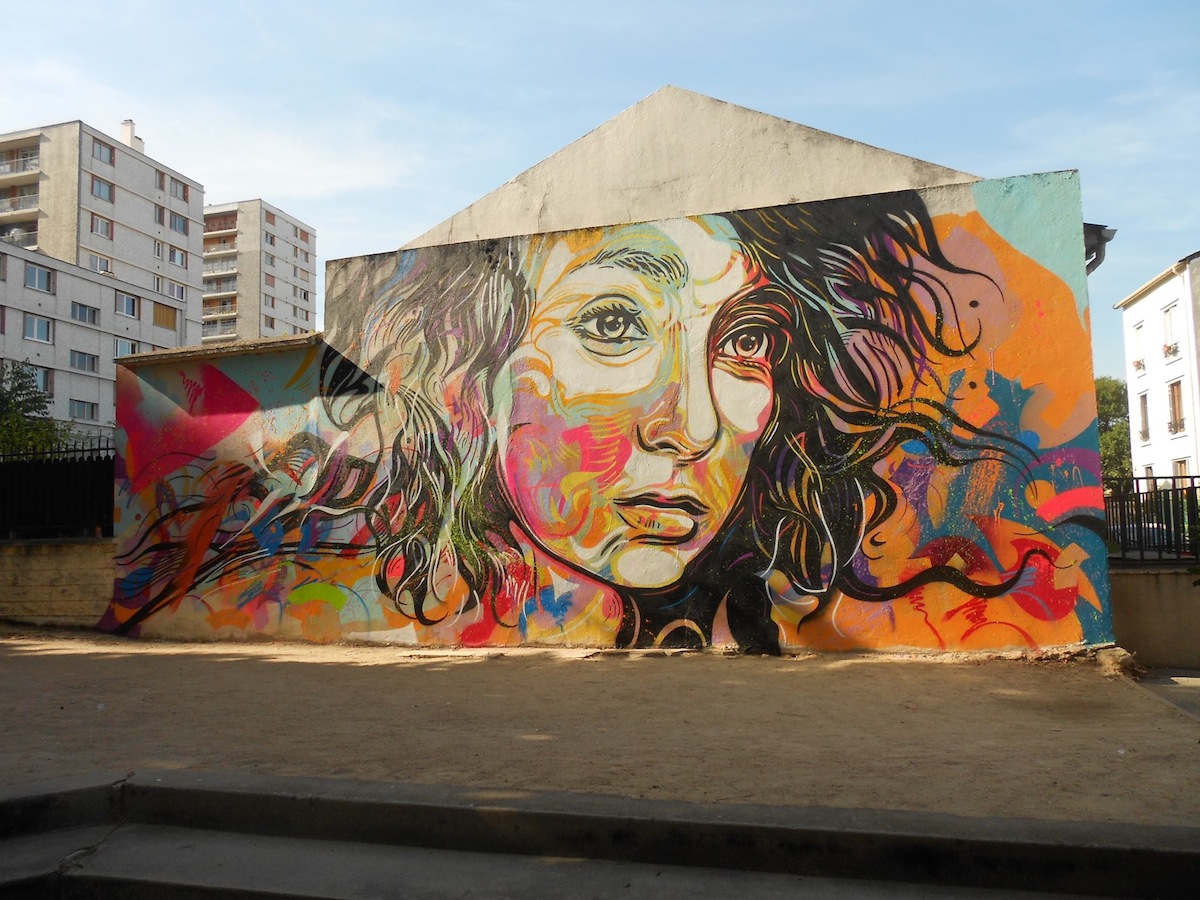 by c215 in Vitry-sur-Seine, France

I can’t get enough of the way this girl was painted. The lines on her face echo and dance in bright bouncy colors that give her expression a sense of motion – almost urgency but not quite. The lines almost look like skinny little fish, swimming through the colors, some synchronized in groups and some scattered and rushing along as quick as they can.

Street art is so great because of how impromptu it seems, and when you see it yourself it’s always the happiest surprise. France looks like it might be one of the best places to see it – a lot of whole building sides taken up with larger than life scenes that brighten up the cityscape. Even small quirky street art like the one on the right makes you smile, and brightens up a boring sign just a bit.

My favorite street art from France fills up this post but if you know another country whose street art is worth describing, comment and I’ll make a series out of it☺ by Alice in Vitry sur Seine The Weight of Air: Incredible street art on 3rd

These pictures are from some beautiful street art I passed yesterday. I tweeted out an image, but decided it deserved its own post, especially since it takes up an entire building. You can find it for yourself on 3rd Street between 2nd Ave and Bowery.

Shadowed birds fly towards her with fervor, surrounding and overwhelming this anonymous person as she covers her face in despair. The paint is rough and dripping in all places and like most street art, this only makes it more beautiful since it’s being forced to survive outside on the New York City streets.

The birds fly from beneath written words which read:

Faif, a Barcelona-based street artist, has been making some pretty great stuff lately, poking fun at how seriously we take art and society in general.

I really like the “roped off” “framed” pieces along the wall in the second picture below. The ropes block us from seeing that line of the piece, which makes sense because they’re meant to keep us back and away from them anyway.
Like walking into a snarky cartoon full of meaningless labels that point out how stupid all labels actually are.