Thanks to all the fabulous technology now available, GO Brooklyn Art’s Open Studios weekend was a huge success. It was hard to tell at first though, since everyone participating was spread out all over Brooklyn during two full days (well, from 11am-7pm), but judging from the statistics just released (you can see all of them at the end of this post), there were more visitors than artists which at first seemed a hard feat to accomplish.

More than 1,800 artists in Brooklyn (can you believe there are that many artists in one borough?) opened their studio doors last weekend to whoever wanted to come by. And thanks to an awesome website set up by GO Brooklyn Art, visitors could peruse the works of participating artists and set up an itinerary of people and pieces they wanted to see for themselves. A neat little accompanying app let you take your profile on the go so that all the info you needed was right there in your pocket. You could register as a Voter online, and after checking into at least five studios with unique check-in numbers posted at each studio, you’re able to vote for your three favorites – and the three artists with the most votes win a spot at an exhibition hosted by the Brooklyn Museum.

Each studio was marked with a little “GO Brooklyn Art” sign, making them easy to pick out, plus specific instructions on what apartment number to buzz and which artists were in the building. Mostly there was an uncomfortable feeling of walking into someone’s home, but the spaces where multiple artists worked together and lived somewhere else were my absolute favorite.

What I didn’t realize when first looking at a map of Brooklyn, is that the place is actually gigantic, and venturing from one specifically chosen studio to the next required either a lot of walking or subway rides that added up. After checking in to the first studio on my itinerary and finding the next closest at least two subway stops away, I opted for proximity over itinerary, moving to the space on the map with the most studios in one place.

Once I had the strategy of it down, getting to meet the artists in person was actually a really great experience. They really wanted first-viewer opinons of their work, and listened to what I had to say. They wanted to know where I went to school and why I came all the way out to Brooklyn by myself. I was able to hear from the artists themselves why they created what they did and what it meant to them.

Now I’ll just give a little synopsis of each of the six studios I was able to visit (before the time constraints of weekend homework set in):

Kind of like sculpture for a giant, Chadwick’s work was simplified large-scale shapes that looked impressive when gathered altogether. 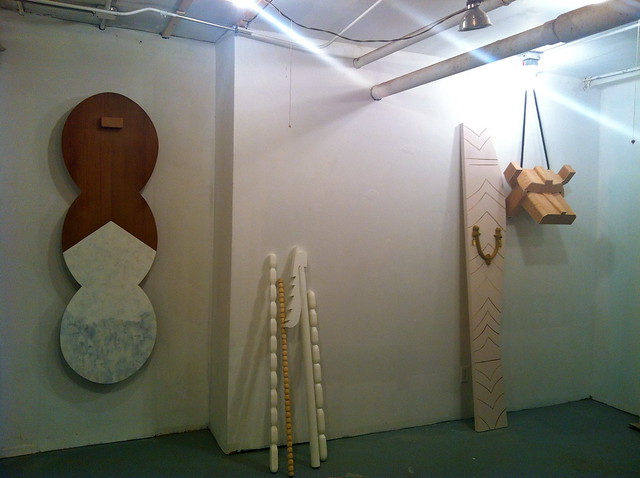 2. Clark Goolsby: painting, sculpture, mixed media
Clark’s paintings were my favorite, like an explosive collage made from bright colors and shapes, every once in a while a recognizable animal or image. 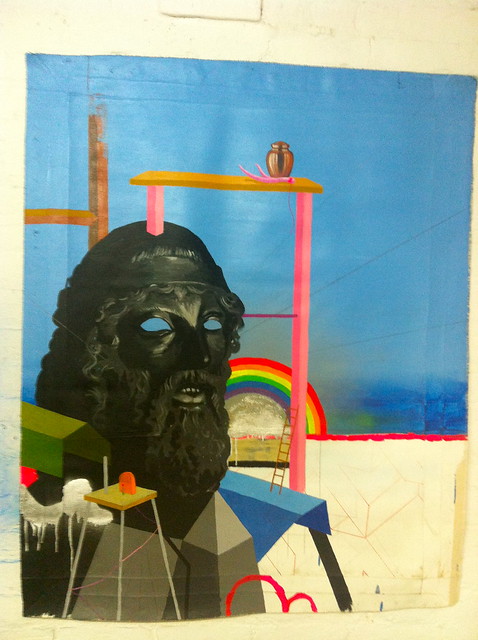 Her paintings were whimsical chaotic canvases and her photographs were organized compositions, so it made sense when she said “the fulfill completely different purposes in my life.” 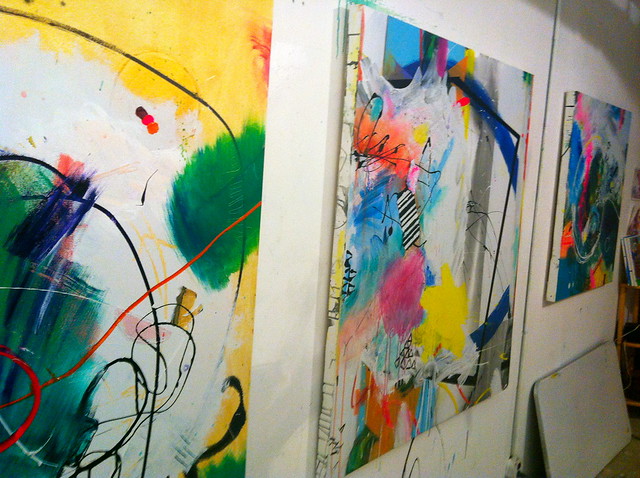 His work was inspired by the “spiritual search we all experience,” striving to “illustrate the energy of life within the universe” through abstract painting, which usually I don’t buy, but all his pieces looked like abstract planets exploding with color. 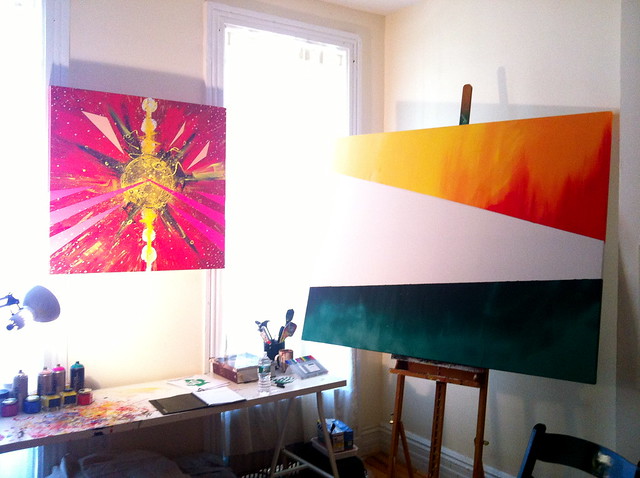 Using his canvases as a silly interpretation of propaganda, Peter’s pieces combined stylistic themes and recognizable images to bombard the viewer with a colorful joke. 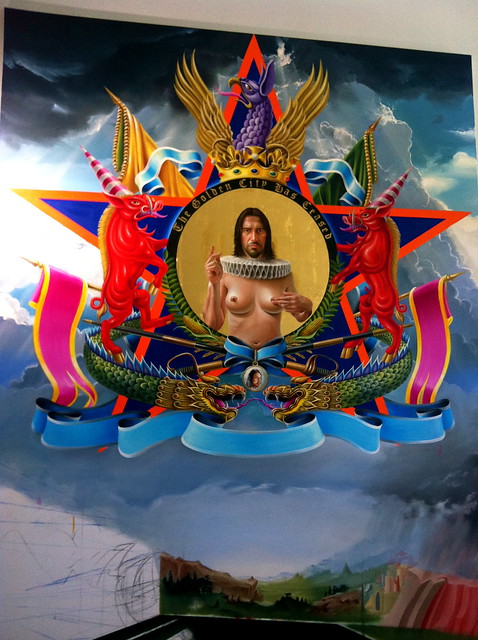 Her studio was tiny, and so was a lot of her work. She paints individual frames of a film and pieces them together, as if the canvas could move, letting the whole image swim in the color of paint. The image below is a picture from the film, where a girl in a cape is running and running.

See all the pictures of these artists’ work, plus some really cool Brooklyn street art in my new Flickr set here!