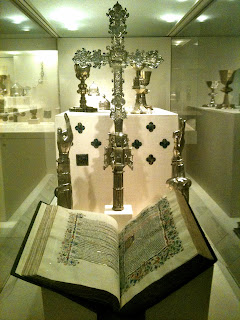 Christian art is so funny. It looks like how it’s supposed to look, which I suppose is a good thing but usually it just feels so… uninspired. Which is ironic because Christianity takes its essence in inspiration. You’re supposed to feel Jesus in your heart and sense the evil of Satan and temptation. And compared to how involved your heart is supposed to be in the religion, there’s a surprising lack of heart in the art that represents it here in this exhibit. I don’t think anyone’s ever seen a painting or a statue of Jesus and been able to recognize who made it. There’s no style, there’s no voice. Because just like any of the various establishments that teach the religion, nothing is ever really open to interpretation. Because different interpretations mean different sects and stand as dividing factors between who’s Lutheran and who’s Catholic. Somehow though, all of these sects seemed to agree on how the general field of Christianity would be represented to the world: Jesus is white (even though he probably wasn’t) he has a beard, Mary is young and beautiful, and for the most part, everyone looks exactly the same. People are always kneeling or praying or reading the Bible or mourning Jesus’ death. And honestly, if you’ve seen one stained glass window, you’ve seen them all. 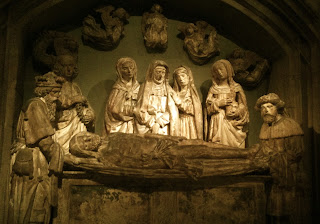 Size is the only difference I can find. But the only other really obvious difference in these depictions is the little halo around Mary’s head—she’s either divine or she isn’t. And for one little circle there really has been a whole lot of fighting. But sitting down, looking at all of this Chrisitan art in one space makes all those subtle differences (that for some reason are the biggest deal) seem like the dumbest disagreement I’ve ever heard of because when it comes down to it, a cross is a cross. And all the artistic representations of what the Catholics and the Protestants believe in look almost exactly the same.

Even in other religions, it’s basically all just praise of the divine, and it’s so upsetting that so many people have had to die just because “the divine” means different things to different people, even though the fundamental concept remains the same. Because even though almost every religion attempts to teach peace and acceptance, if your Jesus isn’t white or bearded then you’re wrong and all of this boring repetitive art is what’s getting into heaven instead of you.
GD Star Rating
loading...