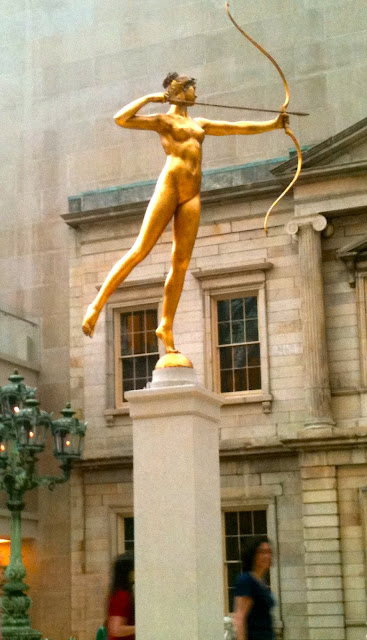 Even though it’s not the original statue that once topped Madison Square Garden, this Diana featured in the Met is still so stunning. She’s a smoldering gold color, sunnily bright but darker at the seams of her body than anywhere else. Her dark golden hair is loosely pulled back in a bun that’s expertly placed on the back top of her head, right where you’d think an up-do should be. She looks like someone’s vision of perfection, a tall golden goddess whose femininity gives her grace and a perfect body, but she can still shoot an arrow with a professional’s form. But even after all of this, it’s her posture that grabs me. Her right leg is arabesqued behind her with her little golden nugget toes slightly gaping, and her left foot is lifted so that all her weight is perfectly balanced on the ball of that foot. It just looks effortless. Like she and the bow and arrow she’s aiming weigh nothing and are just being carried along by the wind. She belongs on the top of a building.
GD Star Rating
loading...