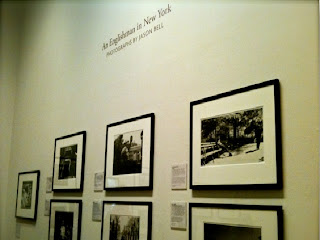 The inspiration behind this exhibit came from an American Vogue photo assignment that Jason Bell began in 2008. He was shooting an English tearoom called Tea & Sympathy that’s located in the heart of Manhattan.[1] After a conversation with the co-owner, Nicky Perry, Bell learned that over 120,000 British men and women were living and working in New York City, just as he was. In an article discussing the exhibit, Bell told the Guardian, “I suddenly thought, ‘Wouldn’t it be interesting to find out why all these people left England?’ And, of course, I also had all these questions about what I personally was doing there.”[2]
What emerged was this beautiful collection, now a book of the same title. Of course, there was some difficulty in turning the most photographed city in the world into something no one had ever seen before. Rather than focusing on the city itself, the standard buildings or the classic landmarks, Bell turned instead to the English perspective. Beside each portrait in the exhibit is a quote from the person in the picture, describing their first experience in New York, their misconceptions about the city, or why they came in the first place. Bell’s first memory of Manhattan is quoted in the same article. He recollected, “Seeing an expensively dressed woman in her 80s on the Upper East Side bending down to pick up dog shit with a perfectly manicured hand.”[3]
Bell has been living between New York and London since 2003, and although he studied Politics, Philosophy, and Economics at Oxford University, he had already decided on a career as a portrait photographer. He’s photographed everyone from Michael Phelps to Colin Firth, to Katy Perry, and has also shot a number of popular advertisements for movies, and television shows. But as an Englishman living in New York, this project was different. “I went for a walk in Central Park with Sting, and for a cup of tea on Kate Winslet’s roof terrace, sat on Zoe Heller’s stoop and watched Stephen Daldry bicycle down 8th Avenue… I started with a blank canvas and was amazed by the number of Englishmen and women who have made such a large impact on the cultural life of the city.”[4] In the description shown in the exhibit he says, “I learnt more about what it means to be English, what it means to be a New Yorker, and where the two intersect.”
[1] http://www.jasonbellphoto.com/#/published books/
[2] http://www.guardian.co.uk/artanddesign/2010/aug/15/jason-bell-portraits-english-new-york
[3] http://www.guardian.co.uk/artanddesign/2010/aug/15/jason-bell-portraits-english-new-york
[4] http://www.textileglobal.com/2011/03/jason-bell-an-englishman-in-new-york-closed-set-with-julie-bensman-the-fashion-spot.html
GD Star Rating
loading...