The Sackler Wing, The Met

June 25, 2011
Right now I’m sitting in probably one of the most well-known museum exhibits in the world: the ancient Egyptian section of the Met. More specifically, the Sackler Wing, which doesn’t really mean anything to anybody until you know it’s the huge open room with the little lake and the huge wall of windows overlooking Central Park. If you’ve ever been here, you know how impressive-looking this room is. Stone benches form the frame of the island in this little man-made lake scattered with shiny pennies. And in the middle of this elevated stone island stands two ancient Egyptian structures that look like they came straight out of The Mummy (or The Mummy Returns, either one…). Or maybe from the ride based off the movie at Universal… 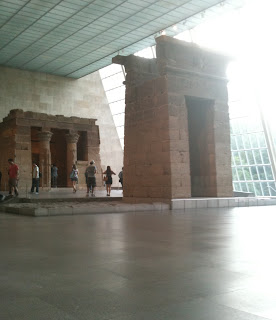 Digression: I wonder when society shifted from the movie looking like the real thing to the real thing looking like the movie. At what point in time did kids start watching Spongebob before they saw the ocean for the first time? Probably around the time that one kid drowned trying to find him. I mean, obviously it’s much easier for some people to rent The Mummy than go to the Met and see this amazing exhibit, but I just think it’s so interesting that some child in this room is probably mentioning how much this place looks like the movies instead of the other way around. That movies and commercial places and things did such a good job marketing themselves that now those are the original to most people. And the time period or place that it was modeled after (like ancient Egypt and The Mummy ride or Africa and The Lion King) now looks like the movie or the ride instead of the other way around. How many people that have ridden the Spiderman ride have actually held the comic book in their hands? Not me at least.


But ANYWAYS, back to the Met:  Surrounding the island are walls filled with pieces of broken hieroglyphics and ancient, pompous-looking statues.  But people hardly even notice them for because they’re just the supporting players, since a picture of you in an enveloping ancient Egyptian building is way more impressive to your friends back home than a picture of you next to a comparatively tiny broken piece of stone with a bird painted on it. Besides, the two buildings have hieroglyphics engraved all over them anyways. The cool kind that look like they tell a story about something much more important than us. The first structure in front us really just a giant doorway that people can walk through if they felt so inclined. I’d say it’s about 30 feet tall if I had to guess, and it’s made up of huge blocks of stone stacked masterfully on top of one another, and a pretty impressive arching top that peers over either entrance. The designs ethed into it are still so clear that I would imagine it looked pretty similar to this when it was first built—the museum keeps it in good shape. The building standing behind it is longer and shorter—an actual building with at least four walls and internal rooms you can venture through. But the two columns at the front make it the most impressive; you can tell they used to be fluted  although it’s pretty faded now. For some reason it looks like there’s an extra layer of stoned sitting on top of the roof—maybe it used to be two stories and those are the only remains. Or maybe they were just extra and the museum didn’t know where to put them. But either way, a couple of extra stones, if anything only makes this room more intense, and as I sit here on the stone bench with water on either side of me, ancient Egyptian ruins in front, and light streaming in from the huge panels of glass that unveil one of the most extensive urban (not to mention beautiful) parks in the world, I could never fully realize how lucky I am to have such beautiful things surrounding me. It would be hard not to write about them.
GD Star Rating
loading...