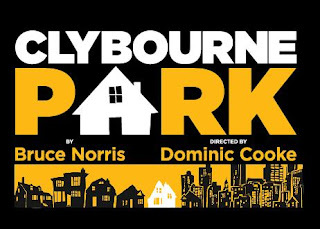 “How many white men does it take to change a light bulb?”
The second act of Bruce Norris’ new play Clybourne Park is sprinkled with this kind of would-be offensive humor, showing how the innate racism within everyone can be covered up in the context of a joke. Which is really how the entire play functions, with Bruce Norris’ insanely clever writing and the actor’s hilarious delivery of lines making the audience laugh their way through this intense social commentary.
The play is performed in two acts, one in 1959 and the second in 2009, and each one juxtaposes the other perfectly, proving that it’s going to take a lot longer than fifty years for racism to disappear because the same issues and dialogue are still around. In the first act it’s pointed out that the black couple can’t ski, and in the second, the wife laughs at the idea of her white husband trying. And both revolve around the attempt to stop the other race from infiltrating ‘their’ neighborhood, in 1959 it was the blacks and in 2009 the whites, both acts echoing the same quote, “You can’t live in a principle.” Norris’ writing is what made the play so powerful, but it was the acting that made it a riot. 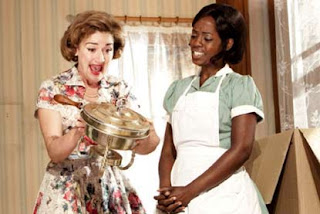 The entire first act was performed under a shade of irony, with every character exuding a ‘Hi neighbor!’ characteristic indicative of what everyone thinks the fifty’s were like—according to I Love Lucy at least. Sophie Thompson as the wife Bev took the first act by storm, with her hilariously forceful voice and adorable naivety making her the most entertaining on the stage. But Sam Spruell who played the ever-so-helpful pastor Jim never once let his ridiculous smile fall, irony dripping from his mouth every time he spoke. But only Stuart McQuarrie as Bev’s husband Russ seemed like he could have actually existed, the sadness over the loss of his son pushing him away from the happy-go-lucky attitude of his wife and neighbors.
With the changing of the acts came the complete reversal of the set, the once beautiful home now dilapidated and crumbling. And conducive to Norris’ echoing theme, the same actors played their 50-years-later counterparts, giving those with the quieter parts in the first act a chance to yell and scream and get offended. Which is exactly what happened as the tiptoe dance of political correctness pushed everyone to the edge. Sarah Goldberg as the pregnant wife Lindsey dominated the second act with her exclamations of “Half of my friends are black!” and “Well that was insulting,” her character serving as I’m-not-racist angel on everyone’s shoulder that whispers, ‘You better not tell that joke.’ But no matter how hard Lindsey tries to excuse her husband’s behavior, it is his bluntness that reveals the brilliantly made point of Clybourne Park: that the current obsession with political correctness doesn’t really make anybody colorblind.
Oh, and it takes one white man to hold the light bulb while the rest of them screw the entire world. Please don’t be offended.