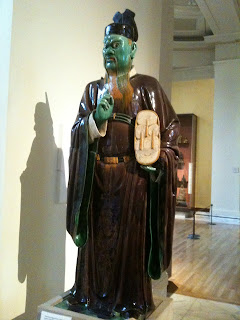 He obviously takes himself a bit too seriously. Standingabout four feet high and made of colored and polished stone is the figure of an Asian higher-up from the 16th century, most likely a religious figure. With greenish turquoise skin and a combed through beard that melts into his chest, his expression says something like, “Really? You’re going to wear that?”– both critical and repulsed. In his left arm he hugs a bundle of scrolls close to his body and his right hand is positioned in front of him delicately. His middle finger is missing, not that he would ever need it. His floor length deep purple robe is belted with the same color as both his beard and the wrap bundled over his scrolls– a light muddy color that might be found on the side of the road after it rains. A white color protrudes around his neck and the same color white sleeve comes out with his right hand from his long draping robe. The sleeves of his robe hang past where his knees would be, almost to the ground. And his widened, critical eyes are black and stare straight at you if you stand in the just the right place, nostrils flared. Tassels hang from the top three scrolls in the bundle and his left foot peaks out beneath his robe. But his cap is most important, a darker purple than his robe, and with a mini headboard at the back of it. Like one you might find in a tacky hotel suite with a queen-sized bed.
GD Star Rating
loading...