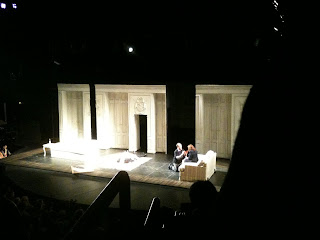 Hamlet, the name all students shudder at when they see it on their high school English syllabus, is often hard to translate for a modern audience. But the National Theatre’s production I saw last Wednesday did a pretty great job. The XX’s song “Islands” played from Ophelia’s boom box, and the king was more of a president, with the desk and the press photos and the Secret Security and everything. And during the famous “to be or not to be” speech, Hamlet held a cigarette instead of a skull, something that seemed both fitting and badass at the same time. 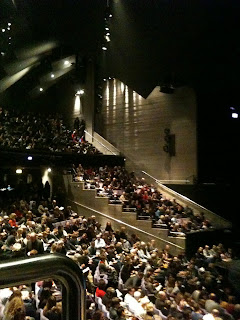 The opening of the play made obvious the Frodo Baggins and Samwise Gamgee duo that is Horatio and Hamlet— Horatio, obviously serving as Sam in this metaphor since he’s the real hero and keeps everyone together while all Hamlet/Frodo does is freak out and complain. The image of Horatio holding Hamlet’s body at the end of the play is still in my head, and when he said his lines through his tears, it didn’t even seem like acting anymore. But Hamlet himself, his voice powerful and full of emotion, managed to deliver his lines with so much force, I felt my hair blown back, even though I was a good 30 meters from the stage.
The king’s ghost however, was by far my favorite, repeating the line “Remember me,” in a very Mufasa-from-The-Lion-King-like fashion as he faded off into wherever it is that dead spirits occupy when they’re not creeping the hell out of everyone. His voice was one of the only ones with an obvious mike, making him even spookier and giving him an air of omnipresence. And Ophelia, although seemingly the youngest of all the actors, was absolutely adorable, and her monologue in the first half broke the hearts of everyone in the audience who had one. And when she lost it at the end of the play, the mental instability of the character was so well acted that I’m sure she has at least 12 anti-crazy prescriptions from doctors who saw the show. 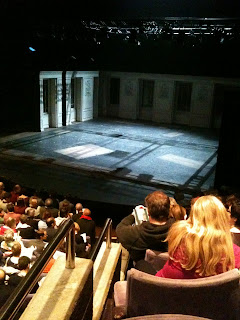 And for being one of Shakespeare’s great tragedies, there sure was a whole lot of laughing. Hamlet’s decent into “madness” cracked people UP. Apparently the British are super fond of the whole Monty-Python-girl-voice thing and random yelling and flailing about. I myself thought it was kind of dumb, but obviously the play wasn’t geared towards 19-year-old American girls who last read Hamlet three years ago because she had to. Still though, the lines themselves sounded so much more right when they were said with British accents.
GD Star Rating
loading...